As influenting by the pandemic, the finance of country have been suffered a hard whack. However, more people participate in fitness activities in China during the pandemic so as to people are confined in home.

The number of fitness clubs and stores across the nation decreased by 11.1 percent in 2020 compared to the previous year, according to a national fitness industry data report that was released in 2021.

On the other hand, the pandemic has amplified the enthusiasm for sports and fitness, according to the report, which noted that the number of people participating in fitness activities in China increased from 68.12 million in 2019 to 70.29 million in 2020, with the fitness population penetration rate reaching 5.02 percent.

In the past few years, an increasing number of commercial fitness equipment has been designed for home applications and outfitted with smart technology, especially during the epidemic, and this has resulted in the family fitness equipment market growing rapidly both at home and abroad.

Huge Business Space of the Fitness Industry in China

It is a good time for the domestic fitness industry to accelerate development. From perspective of various industry stakeholders, there is still a gap in the development of the sector compared with the world's leading markets. As the industry becomes more and more mature, the market is gradually moving towards diversification and standardization. Key stakeholders in the fitness industry include gym operators, fitness equipment suppliers, fitness trainers and certification bodies, as well as consumers.

With the government's comprehensive support for national fitness, the demand for fitness equipment suppliers is on a steadily upward trend. International fitness equipment brands have a high concentration rate, with major brands, including MATRIX, Life Fitness, Precor, Star Trac and Technogym, accounting for about 70% of the market share. Domestic high-end gyms generally use fitness equipment from leading international brands, while the low-end market is dominated by domestic brands such as Impulse, SHUA, Good Family and Orient.

China's overall consumer fitness concepts and habits are currently still being established. Compared with the more mature fitness industry in the United States, China's per capita fitness costs are higher. Consumers are looking for diversified fitness content and fitness consumption models than do not rely on annual membership, as well as more transparent pricing. Increasing national fitness awareness has given birth to consumer demand for more kinds of fitness content, different fitness models and greater flexibility. Changes in consumer demand need to be reflected early on in fitness industry stakeholders' plans.

Comparison of Fitness Industry Scale between China and U.S.A & Europe

Fast-growing of the Output Value of China's Fitness Industry

From a long-term perspective, the pandemic has increased people's awareness of health and fitness on a national scale. The fitness industry, as a core sector of health industry, will continue to grow and diversify – the long-term outlook is positive.

As the overall economy continues to grow steadily, China's increasing consumption levels is driving more and more middle class individuals to pursue a heathier lifestyle. The proportion of health-related spending has seen steady increasing over the few years. The rising demand for healthier lifestyles will drive up size of the market and accelerate the process of market segmentation. 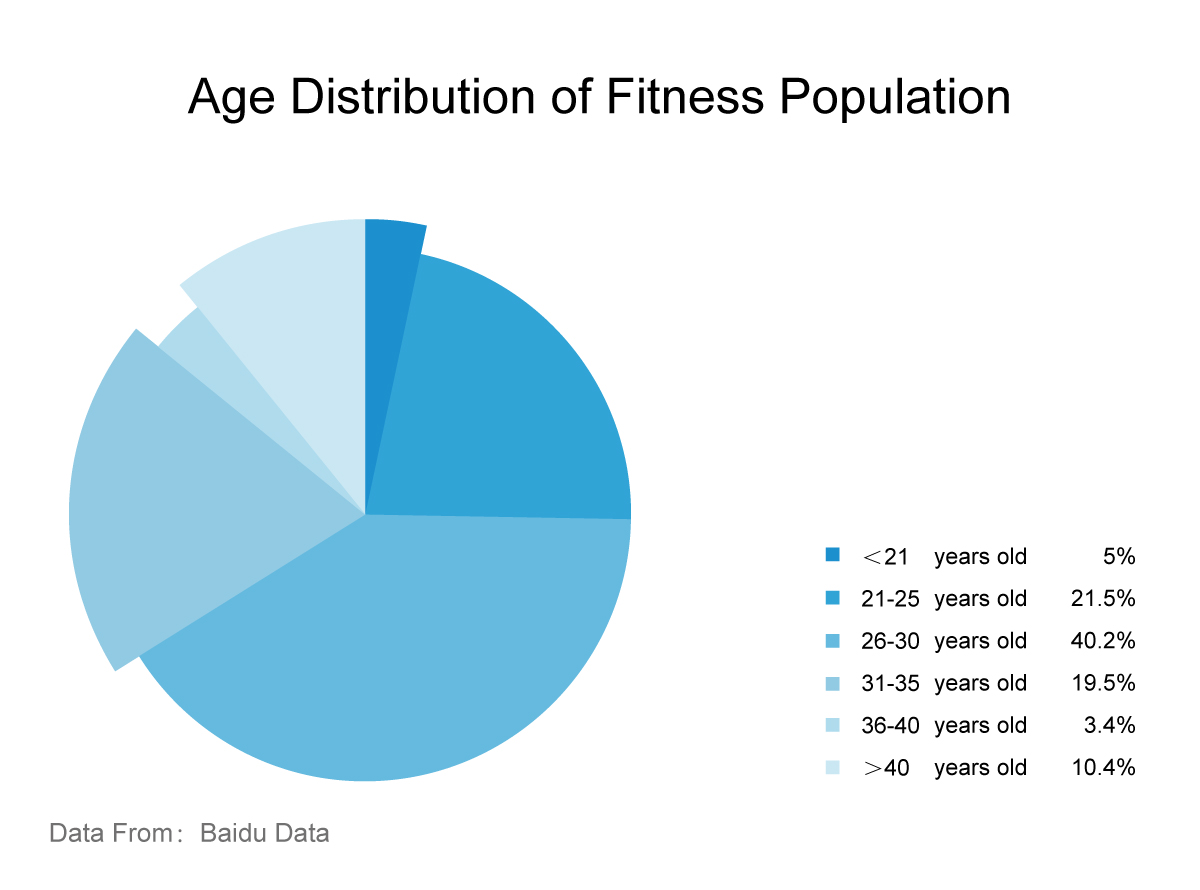 Currently, each provinces, autonomous regions and municipalities of China is actively implementing the national fitness strategy, enriching sports and fitness activities, enhancing people's awareness of fitness, and improving relevant facilities and venues. According to research data, 400 million people in China regularly participate in physical exercise. The National Fitness Program (2016-2020), released by the State Council, and the 13th Five-year Plan for Sport Development, released by the General Administration of Sport, stated that, by 2020, national fitness awareness should have generally increased and the number of people participating in physical exercise should have increased significantly. More specifically, the plan aimed for the number of people participating in physical exercise one or more times per week to reach 700 million and the number of regular participants in physical exercise to reach 435 million.

At the consumer level, the consumption of fitness will increase as individuals pursue a higher quality of life and health. Different consumer groups have different needs. For example, the young consumers often have heavy workloads and only have fragmented time periods to exercise. They, therefore, focus on short-term, high-intensity exercise, often with an aim to improve their physical appearance. Middle-aged and elderly consumers have more flexible time schedules to exercise; however, intensive exercise may be unsuitable for them. Instead, they focus on remedial exercises and rehabilitation. Due to the impact of the COVID-19 andemic, consumers are becoming more aware of the importance of health. 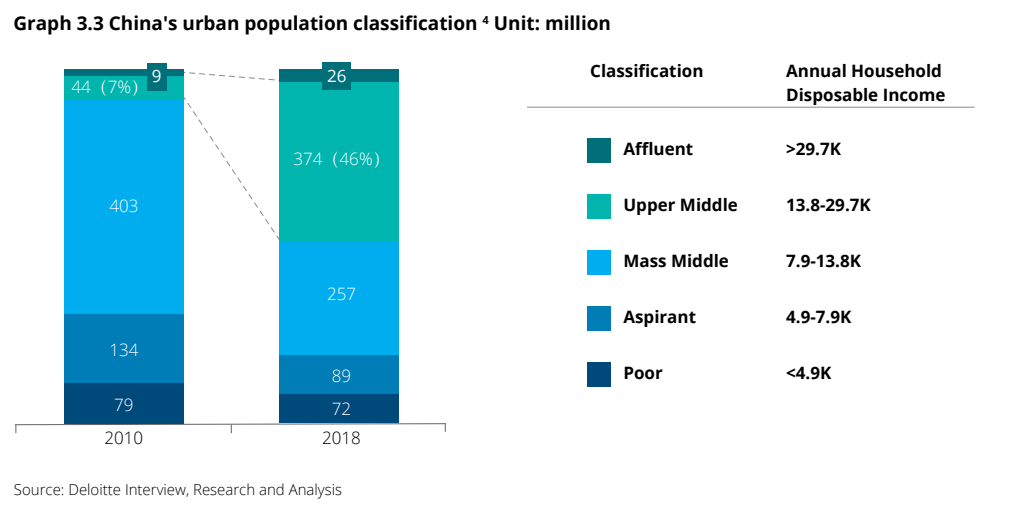 The pandemic has accelerated the digitization of the fitness industry. As gym operators roll out online content and services to maintain and expand customer relationships, consumers are becoming more familiar with home fitness and online fitness.

Catalyzed by the pandemic, consumer awareness of exercise has increased rapidly, while the exercise location has shifted from gyms to living rooms. Sports and Fitness Apps continue to enjoy high levels of monthly active users amid the pandemic, with double-digit growth compared to the same time period before the outbreak. Home fitness is becoming a constantly expanding market in China.

In recent years, the industry standardization level has continuously improved as the market adjusts itself. The Matthew effect has gradually emerged, and the decentralized market is transforming to a relatively concentrated market. Covid-19 has accelerated industry reshuffling.

Industry experts estimated that 30-50% of gyms nationwide permanently closed down during the epidemic, mainly personal training studios and traditional gyms with insufficient cashflow, as well as traditional gyms with improper operating models. The proportion of closed gyms in firsttier cities reached 30%; this figure grew to 50% in second- and thirdtier cities.

In terms of online models, an "online + offline" model will become the norm. During the epidemic, gym brands conducted live courses and recorded TikTok short videos to maintain interaction with users. Online platforms will not replace the offline scene in the long run, but they will become deeply integrated with it. Online classes lack interaction, and most gym brands are unable to achieve profitability through online courses.