Are warmups before exercise just a waste of time?

The advice drilled into most Americans since elementary school gym class has long encouraged always warming up before exercising and cooling down after. But in reality, many people – including some serious athletes and even some personal trainers – ditch these elements, often in the interest of time or pursuit of higher workout intensity, says Jim White, a personal trainer, dietitian and owner of Jim White Fitness & Nutrition Studios in Virginia Beach and Norfolk, Virginia. "People are just busy, and they skip the warmup and cool down," he says.

But, experts agree that warming up before a workout is a key component to getting the most out of your limited time in the gym. "Some people can get away with not warming up, especially when they're younger," says Kirsten von Zychlin, a physical therapist and athletic trainer with the Jameson Crane Sports Medicine Institute at the Ohio State University Wexner Medical Center in Columbus. "But as we age, our muscles and other soft-tissue become less adaptable. So a functional warmup is a great way to prepare our bodies for movement and reduce the risk of injury."

1. Keep it short and light.

"Functional warmups should be 10 to 15 minutes in duration and completed no more than 10 minutes before starting your activity or exercise," von Zychlin says. "Start with slower activities and progress to higher-level, faster-paced and explosive movements as appropriate."

She adds that if your exercise is a sport, then "including sport-specific tasks primes the neural pathways and neuromuscular activation. In other words, it wakes up the muscle-memory pathways you've developed practicing your sport."

For example, if you're undertaking a swimming workout, start out with a few easy laps of technique drill work or slower-paced swimming to warm up your muscles and get ready for the main set.

If you're going running, start by walking and gradually increase the pace to warm up your legs and slowly elevate your heart rate. If you're playing basketball with some friends, run some light dribbling drills to get your blood moving before the game. 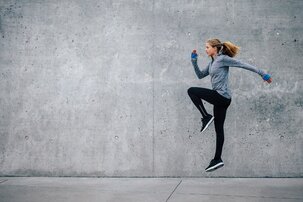 2. Do dynamic – not static – stretching.

If you walked into White's gym, you'd probably see at least a few people walking around with their arms out like Frankenstein. That's because they're doing a warmup appropriately named "Frankenstein," in which they kick their legs up to meet their arms while walking. He also recommends butt kicks, arm circles and other movements that stretch the muscles actively. What you want to avoid prior to exercise: static hamstring or other stretches when your muscles are cold.

Research shows that such movements can actually decrease your power in the workout itself, Moran says.

Static stretching is what many people think of as the primary way to stretch. Things like bending over to touch your toes and holding that position for 30 seconds or pulling your arm across the chest as far as you can and holding that position for 30 seconds to stretch the triceps are examples of static stretches. This form of stretching has its place and can increase flexibility when done correctly, but it's not the right choice for the beginning of the workout, experts say, because holding a static stretch on cold muscles can elevate injury risk.

You can do that by: "A pre-workout warmup should entail movements that closely resemble the actual workout," Torres says. For example, "if the workout is leg-focused and will have plenty of squats, I wouldn't have my client stretching their hamstrings or quads. The warmup would be squats. We would do them at either a lesser intensity or range of motion than the actual workout calls for."

The reasoning behind this approach to warming up is that "doing the actual movement gets your joints warmed up and blood into your muscles. When doing this you're already making your muscle and tissue pliable" with the specific movements you'll be doing in the main part of the workout.

By the same token, Moran says that if you're gearing up for cardio, aim to increase your breathing and heart rate slowly to prevent fatiguing too early in the exercise itself. Going from zero to 100 would be like leaping out of bed in the morning without sitting up, shaking off the grogginess and stretching first. "It's preparing our body to go into a different phase of activity," she says.

If you're preparing for a weightlifting workout, on the other hand, it's most important to practice your movements with no weights or light weights to test drive how your joints are working that day and practice your range of motion. In other words, you don't want to learn you have a kink in your knee or your stance is unsteady when you have 100 pounds on your back. "If something hurts," Moran says, "don't do it until you consult your physical therapist, physician or medical professional."

Team sports or other agility workouts, meanwhile, lend themselves to warmups like speed drills in order to activate your neuromuscular system and test out your quickness that day.

Before a cycling workout, for example, Winsberg likes to do "ladders" – first building up and then lowering the resistance, then speeding up and slowing down and finally increasing and decreasing both power and cadence. "I find it's a really good indicator of fatigue," she says. "If there's not quickness there, it's probably not a day to do a really tough workout." 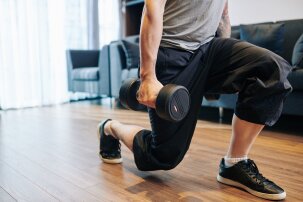 In addition to doing workout-specific warmups that will prepare you for a specific activity, von Zychlin says it's also important to include movement in multiple planes. "Don't just perform exercises straight in front of you. Also move backward, laterally and incorporate rotational movement patterns as applicable."

She adds that planks or other suitable core exercises are "a great place to start your warmup," as these engage and wake up the entire body. She recommends then moving into more dynamic stretching exercises such as:

You can then transition to quicker-paced movements such as:

"If you're unable to perform quicker-paced movements, don't be discouraged," von Zychlin notes. "You can still get an appropriate warmup without these impact activities." 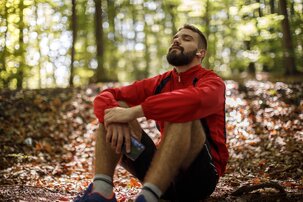 If nothing else, warming up mentally is good for your future workout physically. Plenty of sport psychology research demonstrates that visualizing how you'll succeed on the court or field can dramatically improve performance.

"It's helpful to understand what the goals of your workout are before you go into it," says Winsberg, who also serves as chief medical officer of Brightside, a mental health telemedicine service. She recommends thinking about what you'll say to yourself when you feel like quitting or face any other challenge during the workout. "Our thoughts," she says, "generate our feelings."